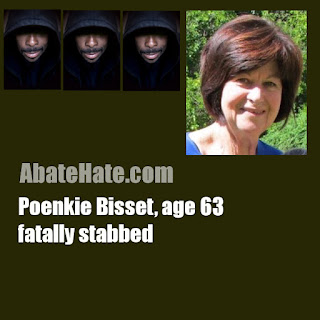 DAILYKENN.com -- Poenkie Bisset, 63, was fatally stabbed at her farm near Smithfield, Free State. Bisset lived on the farm with her husband, Arthur Bisset.

Reports say the victim died from stab wounds to her neck. She was discovered by her husband.

Three suspects have been arrested, one of whom was a former employee. Upon his arrest, police found items belonging to the victim including earrings, a wedding ring and cash.

In addition to her husband, the victim leaves behind two daughters.

According to an informant who was at the scene, it appears that Poenkie knew her attackers.

There is no sign of a fight and she was probably caught unawares by someone whom she trusted before she was attacked. A lot of forensic evidence was found at the scene.

Two suspects 38 and 44 of age, and a former farmworker from Bisset, were arrested on Monday afternoon in connection with the murder.

Brig. Police spokesperson Motantsi Makhele confirmed the former farm warden was arrested at his home in Greenfields in Smithfield. He was in possession of items that possibly belonged to Poenkie.

“Earrings, a wedding ring and cash were found in the suspect’s possession,” Makhele said.

[Poenkie Bisset stabbed in the neck on her way to town, wecanstopthegenocide.com, December 14, 2020]