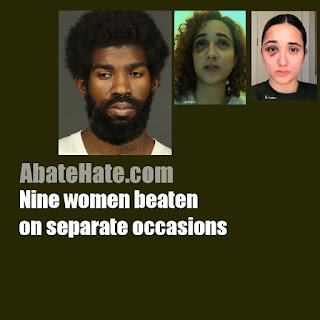 DAILYKENN.com -- Nine light-skinned women were apparent targets for random attacks at a New York City subway station. The assaults targeted women in the 20s and 30s and occurred on separate occasions.

Arrested after the crimes is Khari Covington, 29, who is facing eight hate crime charges and two counts of attempted robberies. Reports say each woman was punched in the head.

No outcry has been noted from "feminists." In the hierarchy of social justice offenses, racism trump sexism. Therefore, when a black male attacks a light-skinned woman, social justice determines that no offense has been committed. However, had a white male assaulted nine dark-skinned women at random, the international media would be aflame with accusations of systemic racism and, no doubt, placing blame on Donald Trump for creating an environment conducive to white racism through dog whistles.

Last year (2020) a white woman was dubbed 'the Central Park Karen' and was vilified by the mainstream media for calling authorities while allegedly being harassed by a black male. That vilification may have discouraged the women attacked at the subway from promptly contacting police.

A man has been arrested after carrying out a suspected string of random assaults on 'light-skinned' women at a Brooklyn subway station.

Khari Covington, 29, was arrested and charged with a slew of hate crimes on Tuesday.

He is accused of attacking nine women on separate occasions in East Williamsburg since last August.

Seven of the alleged assaults occurred within the Morgan Avenue subway station.

Two other assaults happened on the streets above.

Covington lives at a homeless shelter two blocks from the train station.

In the first incident, Covington is alleged to have pushed a woman who had been jogging and then punched her.

Covington appears to have targeted light-skinned women, according to the New York Post, in a pattern of attacks that started in early November and carried on until last week.