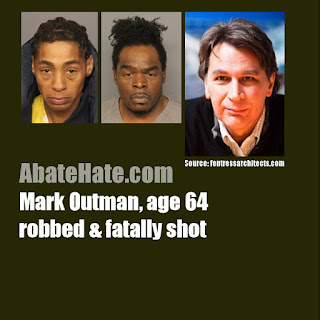 DAILYKENN.com --Mark Outman, age 64, was robbed and fatally shot at his Denver, Colorado home. Outman was an renowned architect noted for his work on airports around the globe.

Both Outman and a woman were shot inside Outman's home. He was found by police in the front yard.

Charged after the crimes are 38-year-old Joshua Hamm and 44-year-old Tameka Dudley. A third suspect, Larry Hamm, 47, was fatally shot by police after hijacking a vehicle during while fleeing the crime scene.

The suspects were posing as utility workers, reports say.

About 11 a.m. Dec. 28, Denver Police Department (DPD) responded to a call of a burglary in progress in the area of North Monaco Parkway and East 9th Avenue.

DPD, in a news conference on Dec. 29, said two or three suspects had gone to the house wearing reflective vests and pretended to be utility workers to gain access.

The home's owner, Mark Outman, and a woman related to Outman were both shot inside the home, DPD said.

Outman died at the scene after officers found him in front of the home when they arrived, according to DPD. The woman was taken to Denver Health in critical condition. The Denver DA said she survived her injuries.
...
Meanwhile, officers heard shots being fired north of East 10th Avenue and Magnolia Street and saw a carjacking taking place.

After watching the suspect, believed to have been involved in the burglary, attempt to get into two cars, he was able to get into a third car with a female victim inside, DPD said.

Officers feared the victim would be assaulted or kidnapped, so an officer discharged their weapon, hitting the suspect, DPD said.

The carjacking victim was safely pulled from the car. The suspect was taken to Denver Health where he was pronounced deceased. He was later identified as Larry Hamm, 47.

on January 09, 2021
Email ThisBlogThis!Share to TwitterShare to Facebook
Labels: AbateTheHate