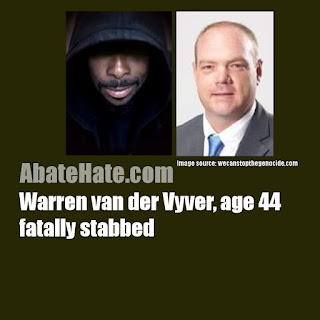 DAILYKENN.com -- Warren van der Vyver, age 44, was fatally stabbed December 23, 2020 while jogging in the Eastern Cape. The victim was a noted environmentalist who was vacationing with his family at Kenton on Sea at the time of his murdered.

His body was found by other joggers. Robbed of his watch and cell phone, ven de Vyver died from a single stab wound.

He was “the general manager of Jozi Trails, a non-profit that aims to uplift and improve the safety of nature trails in Johannesburg,” reports say.

Warren van der Vyver (44) the general manager of Jozi Trails, a non-profit that aims to uplift and improve the safety of nature trails in Johannesburg was murdered while jogging. Warren and his family were on holiday at Kenton on Sea in the Eastern Cape when he was stabbed to death on Wednesday 23 December 2020.

Jozie Trials which is funded by Hollard and the Johannesburg City Parks & Zoo (JCPZ) announced on social media:

“We are incredibly heartbroken at the loss of our General Manager, Warren van der Vyver. Although he had been at Jozi Trails for a short time, he made a massive difference to the organization. Our hearts, thoughts and prayers are with his family at this time, Warren will be deeply missed.”

He had sustained a single stab wound while out jogging and had been robbed of his watch and cell phone.

A massive manhunt involving more than 80 people on the ground and two helicopters were launched around the bushy Kenton area for the killers.