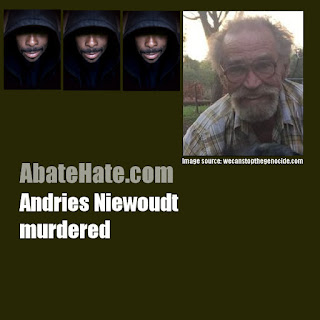 DAILYKENN.com -- Andries Niewoudt was reportedly murdered on his farm in Hammanskraal. The elderly victim’s wife was locked in a bathroom by the two assailants and managed to break out two days after the attack. The victim was identified as Andries Niewoudt

Reports say the attack occurred December 21, 2020 and Niewoudt died December 24. His wife was hospitalized. The attackers stole the couple’s vehicle and a gun.

Reports did not disclose the number of attackers nor the weapons used to kill him.

The elderly man succumbed to his injuries in hospital after being attacked on a farm in Hammanskraal, Gauteng, on Monday.

According to Casper Liversage of the Hammanskraal Community Policing Forum (CPF), the elderly man and his wife were discovered by community members two days later after they were overpowered in their home by four suspects around 1pm.

“The attack was discovered on Wednesday when the police discovered the couples vehicle which was left abandoned.

“A resident identified who was the owner of the vehicle after the police had contacted the CPF to find out if they knew who the vehicle belonged to,” he said.

Liversage said CPF members went to the farm and discovered the man’s wife in the house where she was locked inside the bathroom.

“She had only managed to break out of the bathroom where she was locked up shortly before. Her husband was found tied up and unconscious on the kitchen floor.

“He was taken to hospital where he died from his injuries. The woman is still in hospital,” he further said.

Meanwhile, according to the police, the suspects are still on the run after they made off with a firearm and the couple’s vehicle.

“The man was seriously assaulted whilst the attackers demanded a firearm. They later found a firearm in the safe and left in the couple’s vehicle.

“The vehicle that was found abandoned by police officer who are stationed at Temba. No arrest have been made yet.”

[No Santa for the Niewoudt family this Christmas, wecanstopthegenocide.com, December 27, 2020]