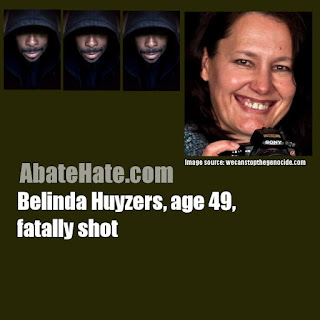 DAILYKENN.com -- Belinda Huyzers, age 49, was fatally shot during a home invasion on December 4, 2020. Her 50-year-old husband was injured during the attack. The crime occurred in Glen Marais Kempton Park, Gauteng.

Reports say at least three intruders gained access to the home through a restroom window after cutting through security bars. The victims were found watching television and shot. The couple’s 19-year-old daughter was outside the home talking to friends when two loud noises were heard. That prompted the friends to enter the house where they were ordered into a bedroom by the assailants. The daughter found refuge in a wendy house and phoned police after the left.

Stolen were laptops, cellphones, jewelry, and a wallet.

On Friday evening 4 December 2020 at around 11 PM the Huyzers family in Glen Marais Kempton Park, Gauteng was attacked by armed men in their suburban home. Belinda Huyzers (49) and her husband of twenty-five years Jan Huyzers (50) fell victim to a horrendous urban crime in which Belinda was murdered.

According to the insurance group 1st For Women, a woman is killed every 3 hours in SA.

Belinda’s murder follows just two days after Joan Joyi was strangled to death with a rope.