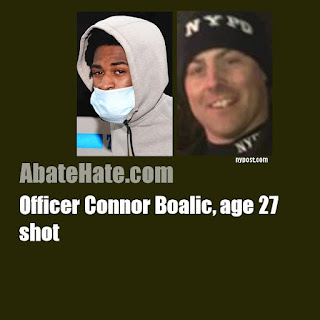 DAILYKENN.com --Officer Connor Boalic, age 27, was shot in the back in New York City. Boalic survived the attack uninjured, due to a bulletproof vest.

“I’m sorry, officer,” muttered William Moss from behind a blue facemask, when asked by The Post if he had a message for Connor Boalick, the lawman whose life he nearly ended.

“I wish it never happened.”

Handcuffed and wearing a gray Nike hoodie, Moss voiced his sudden regret as he was led into Brooklyn Criminal Court to answer charges including attempted murder and assault.

Moss, 20, allegedly fired two rounds into the back of Boalick around 9 p.m. Thursday, as the officer was taking a statement from Moss’ girlfriend, according to cops and sources.