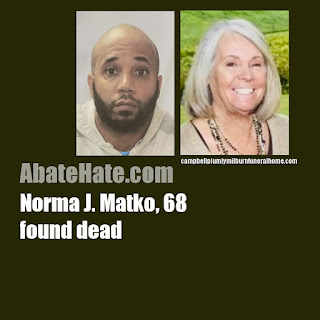 DAILYKENN.com -- Norma J. Matko, 68, was found dead in her  Barnesville, Ohio home early Thanksgiving Day, 2020. Police say she was killed by 47-year-old James Edward Hawley who, himself, was killed in a shootout with police in which an FBI agent was wounded.

Hawley had kidnapped Matko's 45-year-old daughter, Thoue Nichole Bronowski. She was rescued by police at a hotel in Pineville, Louisiana where the shootout occurred.

Police said there had been a relationship between Hawley and
Bronowski.

Police say a Cleveland man kidnapped a Cuyahoga Falls woman he knew, killed her mother in Barnesville around 3 a.m. on Thanksgiving day and fled to Cleveland and then Louisiana.

That's where Thoue Nichole Bronowski, 45, was rescued Tuesday night after police killed the man in a shootout at a hotel in Pineville, La., about 100 miles northwest of Baton Rouge.

Bronowski had not been seen since 6:35 p.m. Nov. 25, according to Cuyahoga Falls police. It is believed that Hawley took her to the home of Bronowski's mother, Norma J. Matko, 68, in Belmont County in the early morning hours Thanksgiving day.

Police said Hawley shot and killed Matko and then drove Bronowski to Cleveland in Matko's vehicle, which was later found abandoned and burnt.

It is believed Hawley then took Bronowski to Louisiana in a different vehicle.

Investigators determined that the suspect posted numerous photos of himself with firearms on social media, with statements saying he wanted "to kill some cops.” Being a felon and in possession of firearms, the FBI pursued federal charges, News 5 Cleveland reported.