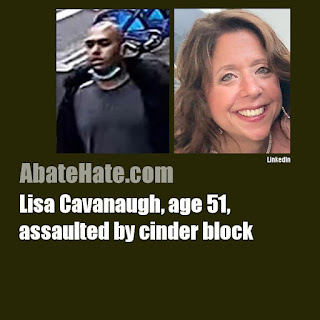 The attack was random and unprovoked.

Reports say the attacker approached Cavanaugh from behind before bashing her in the head. A black male whose photo was distributed by Crime Stoppers is wanted for questioning by police. The media did not say the attack was racially motivated.

• The far-left media exasperated the hatred of white women when it vilified a woman who dared report a black male to police in October, 2020. The man allegedly complained to the woman regarding her dog that was running untethered. The woman, apparently feeling threatened, called police and was subsequently defamed for her action and was labeled with the hate term, "Central Park Karen."

• Black-on-white assaults and other crimes are common, but under reported. FBI statistics for 2019 reveal that when race was known, 82,137 aggravated assault arrests were recorded in which the suspects were identified as black. That's about 225 per day and more than nine per hour.

The Cavanaugh attack was newsworthy due to the victim's employment by the governor's office. Similarly, actor Rick Moranis was assaulted by a black male in New York City on October 1, 2020. That attack also received extensive news coverage.

• In September, 2020, a 73-year-old white woman was punched in the face after confronting a group of black teens, one of whom had snatched her purse, according to a report. The attack occurred in New York City.

• In June, 2020, a 92-year-old white woman was punched in the head by a black male while walking on a New York City side walk. The attack was video recorded, according to reports.