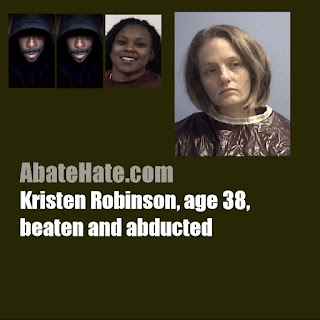 DAILYKENN.com -- Kristen Robinson, age 38, was beaten then abducted at a motel in Madison, North Carolina. Reports say the victim was assaulted in a motel room, then stuffed in a car trunk. She managed to escape as the car sped off. Robinson sustained injuries from the ordeal.

A report in journalnow.com said deputies arrested two of three people wanted in the case.

Takiyah Kenyhata Broadnax, 21, was identified as a suspect. She is charged with first-degree kidnapping, breaking and entering and assault inflicting serious injury. A juvenile faces similar charges.

A 38-year-old woman escaped her kidnappers Thursday morning by jumping from the trunk of their fast moving car along U.S. Hwy. 220, authorities said Friday.

Rockingham County Sheriff's Office investigators have arrested two of three suspected abductors, who allegedly broke into the Budget Inn Motel room of Kristen Robinson of Eden, assaulted her, then loaded Robinson in the trunk of a car at around 8:15 a.m.

The kidnappers drove some 200 yards at high speed before Robinson managed to open the trunk and free herself.

Robinson, whose injuries stemmed mostly from her jump from the car, was transported to a Triad area hospital for treatment, according to Sgt. Kevin Suthard, public information officer for the sheriff's office.

Takiyah Kenyhata Broadnax, 21, of 513 Greenwood Street in Eden and a male juvenile were arrested and each charged in the case with first-degree kidnapping, breaking and entering and assault inflicting serious injury.