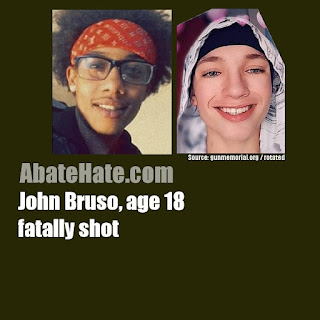 DAILYKENN.com -- John Bruso, age 18, was fatally shot in Niagara Falls, New York, reports say. The teen was shot multiple times while sitting in the passenger side of a vehicle. He died at Niagara Falls Memorial Medical Center.

An 18-year-old Niagara Falls male died of his injuries Tuesday after being shot multiple times while sitting in the passenger side of a car that was parked at 19th Street and Welch Avenue, according to Kristen Cavalleri, public information officer for the Niagara Falls Mayor's Office.

Cavalleri said the shooting happened just after 1:30 p.m. The suspect fled on foot.

The victim was taken to Niagara Falls Memorial Medical Center, where he eventually died of his injuries.

on December 07, 2020
Email ThisBlogThis!Share to TwitterShare to Facebook
Labels: AbateTheHate