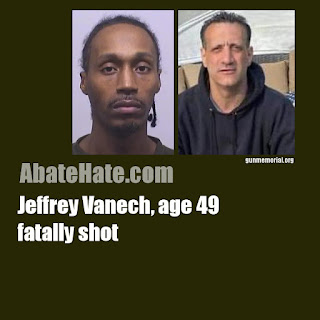 Arrested is Freddy Dontay Hicks, age 36. Hicks was charged with criminal possession of a firearm, hindering prosecution, and tampering with evidence.

When officers responded to the location they found Jeffrey Vanech, 49, of Stamford, lying in the roadway. Medical care was rendered and he was transported to Stamford Hospital where he later died from his injuries, according to Stamford Police Capt. Richard Conklin.

Stamford Police Major Crimes Unit and Crime Scene Unit investigators responded and were assisted at the scene by a Stamford Assistant State’s attorney.

The preliminary investigation revealed that Vanech was shot while he was seated in a parked vehicle.

Investigators developed information from the initial scene investigation that led to the execution of a search and seizure warrant at 20 Cedar Street. A firearm was recovered from the search at this location.

As a result, investigators arrested Freddy Dontay Hicks, 36, of Stamford, and charged him with:

Criminal possession of a firearm
Hindering prosecution
Tampering with evidence

on December 10, 2020
Email ThisBlogThis!Share to TwitterShare to Facebook
Labels: AbateTheHate