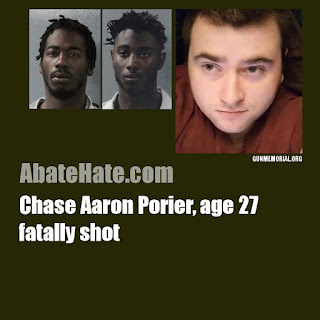 Reports say two males showed up at Porier's home and stole marijuana and cell phones before shooting him.

The incident was reported to police on December 27, 2020.

It is not known if the victim knew the two males.

An East Texan was fatally shot when he confronted by two men who showed up at his home unannounced and robbed him of his marijuana, a witness has told investigators.

The two men then took cellphones belonging to the victim and the witness and left in a blue, two-door car with a black bumper, the Bowie County, Texas, Sheriff’s Office reports.

on December 31, 2020
Email ThisBlogThis!Share to TwitterShare to Facebook
Labels: AbateTheHate