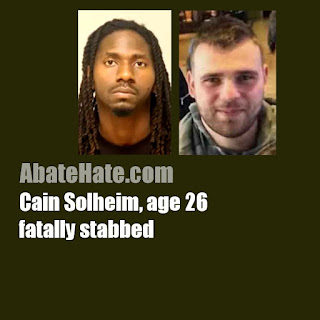 Solheim was with friends for a night "on the town" when they were confronted by another group. Two of the victim's friends were also stabbed, but survived and were hospitalized. The other group reportedly left the scene in a Chrysler minivan with Minnesota license plates. Police found the vehicle and made the arrest.

Hudson is a small town of 14,103 residents of whom 94.7 percent are white, according to 2019 census estimates. It is located just east of Minneapolis, Minnesota.

One of the two persons of interest taken into custody in connection to a fatal stabbing in Hudson, Wisconsin, over the weekend has been charged.

Solheim was one of three people stabbed outside the Smilin' Moose bar in downtown Hudson around 1 a.m. Sunday, Dec. 6. The two others were taken to Regions Hospital in St. Paul to be treated. Their identities and conditions have not been released, but Solheim's family members have said they were friends of his.

After the stabbing, witnesses told Hudson police multiple people got into a Chrysler Town and Country minivan with Minnesota license plates. Police found the van believed to be connected to the stabbing in Blaine, Minnesota, on Sunday afternoon. They took two persons of interest into custody.

on December 11, 2020
Email ThisBlogThis!Share to TwitterShare to Facebook
Labels: AbateTheHate