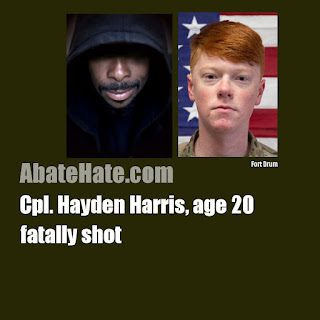 Reports say the crime scene was discovered in Byram by fireman who discovered blood, clothing, and documents. The fire fighters notified police.

Jamaal Mellish, 23, was taken into custody  in New York to be extradited to New Jersey.

Accoding to njherald.com, "Authorities believe Mellish 'abducted' Harris in Harris' 2017 white Chevrolet Silverado and drove him to the New York City area and eventually across the state, Mueller said. A juvenile, whose identity has not been released, was also in the vehicle, authorities said."

on December 27, 2020
Email ThisBlogThis!Share to TwitterShare to Facebook
Labels: AbateTheHate