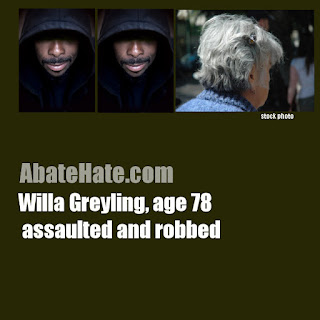 DAILYKENN.com -- Willa  Greyling, 78, was attacked and robbed in her home near Bloemfontein, South Africa. The victim was reportedly hospitalized with a broken chest bone.

Reports say two males broke into the widow's home on the evening of November 20, 2020.

The suspects allegedly wrapped the victim in a blanket which was also stuffed in her mouth. Her hands were bound with a lamp cord.  She was reportedly beaten after she had been bound.

A 78 year old woman, Willa Greyling (78), was attacked and seriously injured on a smallholding outside Bloemfontein exactly 2 months after her husband died.

Mrs Greyling was alone at home in the Kwaggafontein area on Friday evening 20 November, 2020 and already in bed when two black men wearing balaclavas entered the house and came into the bedroom. It is unknown at this stage exactly how they broke in and what safety measures are in place at the home.

Mrs Greyling woke up when the 2 black men wrapped her in the blankets and also pushed the blankets into her mouth. Her hands were tied with the cord of the bed lamp.

The attackers also assaulted the harmless and already tied up woman. Mrs Greyling sustained a cracked chest bone and blue marks all over her body and head from the beating.

The attackers opened the safe and fled with only R500 and Mrs Greyling’s cell phone. Mrs Greyling lied on the floor injured the whole night.

There are 3 families living on the smallholding and 2 men heard Mrs Greyling screaming for help the next morning and came to help her.
Mrs Greyling was admitted to the ICU of the Life Rosepark hospital and later to the orthopedic section.