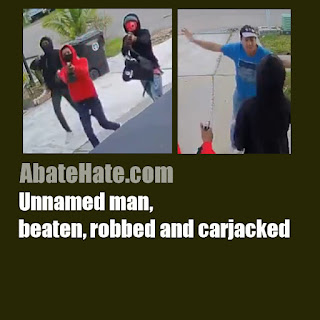 ABATEHATE.com -- An unidentified man beaten and carjacked in broad daylight as he worked in front of his home.

A security video system recorded three individuals casually walking along a neighborhood sidewalk. The trio pointed firearms at the victim while demanding his keys, reports say. When the victim refused, he was assaulted.

Wgno.com reported, "The victim suffered multiple contusions and lacerations to the head during the violent attack, according to the NOPD."

The incident occurred in New Orleans, Louisiana on November 11, 2020.

The NOPD is looking for three armed robbery suspects who attacked and carjacked a man in New Orleans East yesterday.

The trio approached the man while he was working in his driveway in the 13000 block of Williwbrook Drive on November 11, according to the NOPD.

Approaching with guns drawn, the three suspects ordered the man to hand over the keys to his vehicle. When he refused, the robbers began beating the man with their handguns.

The robbers then grabbed the victim’s keys and took off in his vehicle. The victim suffered multiple contusions and lacerations to the head during the violent attack, according to the NOPD.

on November 13, 2020
Email ThisBlogThis!Share to TwitterShare to Facebook
Labels: AbateTheHate