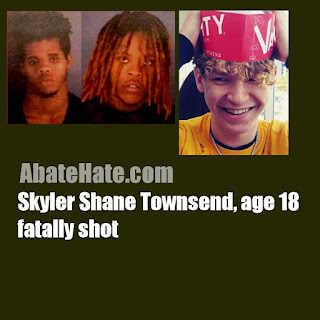 DAILYKENN.com --Skyler Shane Townsend, 18, was fatally shot in Green Cove Springs, Florida. Reports say the teen was the victim of a robbery attempt.

The crime was reported November 22, 2020. It's another example of a productive member of society being eliminated by savagery.

Two others were shot in the incident, but survived.

Investigators told First Coast News they were called to reports of shots fired. At the scene, officers found two men, blocks away from each other, with gunshot wounds.

Both men were rushed to a local hospital where one of them later died and another was treated for his injuries, police said.

Family members identified the deceased victim as 18-year-old Skyler Townsend. He was a graduate of Orange Park High School and wanted to attend Louisiana State University to pursue a career helping animals, according to family members.

"He was very intelligent," said Alexandrea Robertson, Townsend's aunt. "He graduated school early and just turned 18. He was hilarious. He could make you laugh at anything. He was very goofy."