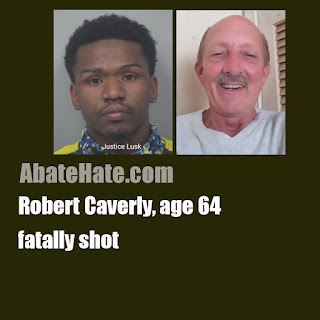 DAILYKENN.com -- Robert Caverly, 64, was one of three men fatally shot in a Gwinnett County, Georgia neighborhood. The other victims were identified as Eugene McClam, 45, and Steven Finch, 33.

The report also say the motive for the crimes in under investigation.

We can only speculate that the murders may have been driven by low intelligence, low impulse control, and low executive function.

Lusk was captured late Saturday night near the scene of the crime. He was booked into the Gwinnett County Jail on Sunday.

The victims were identified as Eugene McClam, 45, of Lawrenceville; Steven Finch, 33, of Arabi; and Robert Caverly, 64, of Lawrenceville. Both McClam and Caverly were residents of the home where the homicides took place.

The motive for the crime is still under investigation.

on November 25, 2020
Email ThisBlogThis!Share to TwitterShare to Facebook
Labels: AbateTheHate