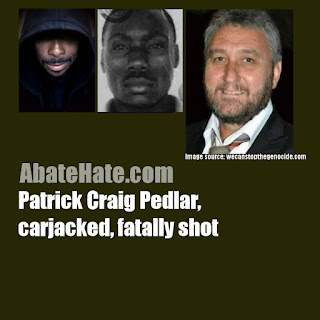 DAILYKENN.com -- Patrick Craig Pedlar was fatally shot during a carjacking in South Africa, according to wecanstopthegenocide.com.

The lodge owner was reportedly accosted by two individuals after he purchased wood from a roadside vendor. The victim was approached from behind as he entered his bakkie pickup truck and dragged from the vehicle by the one of the attackers. Pedlar managed to draw his weapon and shoot the second attacker as he approached. The first attacker reportedly shot Pedlar three time in the head while holding him in a headlock.
The attack occurred November 10, 2020. Pedlar died in the hospital the following day.
The attackers drove off in Pedlar's truck but crashed within a few yards. The wounded attacker was left to die on the roadside while the assailant who shot Pedlar managed to flee and remained at large.
You may view Pedlar's Facebook page here ►
* What do you think?