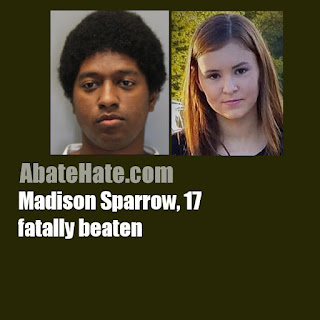 DAILYKENN.com -- Madison Sparrow, 17, was fatally beaten in Delaware. Arrested for the crime is the victim's 19-year-old ex-boyfriend, Noah Sharp, reports say. Sharp beat Sparrow to death with a baseball bat and dumped her body along side an Interstate.

Annika Stalczynski, 17, was arrested. She is accused with conspiring with Sharp to commit murder.

Sharp, 19, admitted to police that he killed his ex-girlfriend by beating her with a baseball bat and then dumped her body in a wooded area along Interstate 95, court documents obtained by the Delaware News Journal say.

A motive for Sparrow’s murder remains unclear, but Sharp allegedly said he and Stalczynski planned the killing. The relationship between Sharp and Stalczynski is also unknown.

Stalczynski and Sharp have been charged with first degree murder, possession of a deadly weapon during the commission of a felony and first-degree conspiracy.