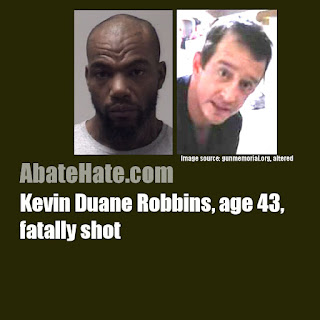 ABATEHATE.com -- Kevin Duane Robbins, age 43, was one of six who were fatally shot during a crime spree in Georgia.

"38 year old Nicholas Martez Nelson is being charged with four of the six murders with charges pending for the other two," according to cbs46.com.

Nelson is suspected of forcing his way into an occupied home where he stole firearms and jewelry. Hours later he is suspected of shooting two at another residence multiple times. Both died. One of those victims was Robbins

... Nicholas Martez Nelson, 38, of Newnan, has been charged in the murder of four Newnan adults, with charges pending on two additional murders.
...

“Upon arrival, officers located two male victims outside the side door that were suffering from gunshot wounds. Both victims were pronounced dead at the scene,” said Cooper.

Cooper said the victims were identified as Willie Edward Bussie, III, 39, and Kevin Duane Robbins, 43. [In Newnan, 1 suspect in custody after 6 murder victims discovered in 4 days, By Ben Nelms, November 9, 2020.]

on November 13, 2020
Email ThisBlogThis!Share to TwitterShare to Facebook
Labels: AbateTheHate