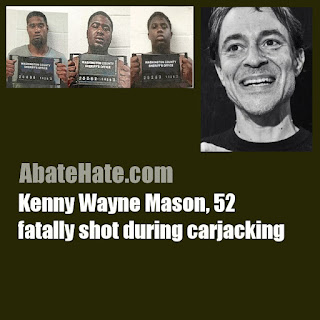 DAILYKENN.com -- "Kenneth Mason, 52, a Mississippi native who moved home after the coronavirus pandemic began; was found shot to death Wednesday north of Greenville," according to clarionledger.com.

Reports say three individuals found in Mason's vehicle after the shooting were taken for questioning. "Donnell Corbin, 18, Devonte Jones, 20, and Fredrick Pearson Jr., 21, were each charged with capital murder," according to nypost.com.

Mason was a longtime maître d’ at Manhattan’s the Waverly Inn, but returned to his home state of Mississippi after the coronavirus began.

"Mason was the co-founder of the New York-based nonprofit Stop Abuse Campaign, which seeks to help prevent child sexual abuse and neglect," according to nypost.com.

Kenneth Mason, 52, a Mississippi native who moved home after the coronavirus pandemic began; was found shot to death Wednesday north of Greenville.

Washington County Chief Deputy Bill Barber said Monday authorities received a call at 12:06 p.m. Wednesday of a man lying unresponsive on the side of Blaylock Road, a rural stretch of roadway.

Barber said Mason was pronounced dead at the scene. He had been shot twice.

Late Monday, the maroon Chevy Trailblazer Mason had been driving was found during a traffic stop in Greenville. The three males in the SUV were taken into custody by the Washington County Sheriff's Department and are being questioned as suspects in the case, Barber said.

on November 01, 2020
Email ThisBlogThis!Share to TwitterShare to Facebook
Labels: AbateTheHate