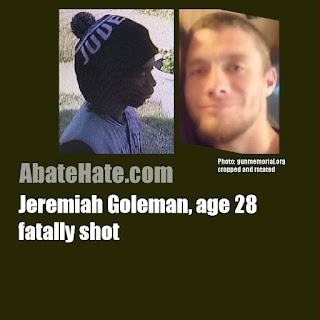 DAILYKENN.com -- Jeremiah Goleman, age 28, was fatally shot in Tulsa, Oklahoma. Goleman was found on a second-story balcony in an apartment complex after running from a crashed vehicle, reports say.

Police have arrested 16-year-old Zachariah Stevenson in connection with the murder of Goleman.

TPD says homicide detectives were able to identify the suspect.

Stevenson will be charged as an adult.

Tulsa police are investigating a shooting near E. 4th Pl. and Mingo.

Police say just before 3 p.m. Thursday, they received a call about shots being fired and a car crashing into a building.

Officers say they found Jeremiah Goleman fatally shot in the stomach on a second-floor balcony at the Meadowbrook Apartments.

on November 10, 2020
Email ThisBlogThis!Share to TwitterShare to Facebook
Labels: AbateTheHate