4 killed in Dallas-Fort Worth shooting spree 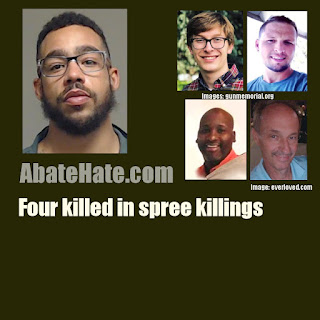 DAILYKENN.com --Blair Carter, 60, Robert Jaden Urrea, 19, Adam Gautreau, 36, and Kenneth Hamilton, 57 were fatally shot during a spree shooting. The crimes occurred in Dallas-Fort Worth over a span of two weeks from October 31 to November 17, 2020.

Reports say Blair Carter was the father of Harris's ex-girlfriend. The other appear to have been shot at random.

At 2:56 a.m. Oct. 31, a Southern Methodist University student was shot in Downtown Dallas.

Robert Jaden Urrea, 19, was walking downtown near the intersection of Harwood and Jackson streets.

Surveillance footage shows Urrea appear to turn toward a white Ford. The video shows Urrea fall to the ground and then the car drives away.
...

Around 8:33 p.m. Nov. 14, Adam Gautreau, 36, was shot and killed along Stemmons Freeway at Empire Central Drive in Dallas.

His mother said he moved about four years ago to Dallas but struggled with drug addiction. Gautreau was homeless and panhandling at the time of his death.
...

A black SUV pulled up behind the man's car and someone inside the vehicle began shooting "unprovoked," police said. The man was injured but a female passenger was unharmed.
...

Blair Carter, 60, was found dead inside the home after the fire was extinguished.

on November 23, 2020
Email ThisBlogThis!Share to TwitterShare to Facebook
Labels: AbateTheHate