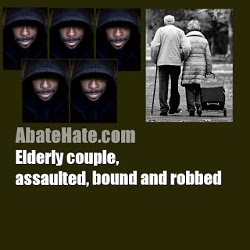 DAILYKENN.com -- An unidentified elderly couple was assaulted, bound, and robbed in Bosveldpark, Kameeldrift East, South Africa. The crime occurred November 5, 2020 at 6:30 a.m. and was similar to two other attacks, one that occurred the same day and another that occurred three days earlier.

According to southafricatoday.net, the elderly man was ambushed by five individuals as he stepped outside his farm house. He was forced back inside where the attackers also assaulted his elderly wife.

An elderly man was overpowered by five armed attackers, assaulted and dragged back into the home after he had gone outside at 06:30.

The man’s wife was also attacked and assaulted in the home and they were both tied up with cable ties. The home was ransacked and the attackers fled in the couples vehicle, a TV, cell phones, a laptop and two firearms.

This was the second attack on the same morning in the area. In the early hours of 5 November 2020, on a smallholding in Raasblaar Road, Kameeldrift East, near Roodeplaat, another elderly couple were severely assaulted and robbed.