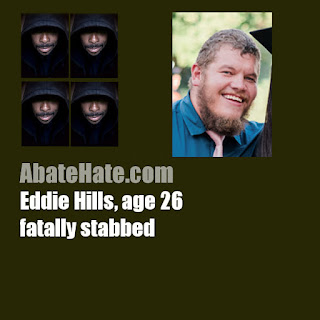 News24.com also reported Hills had been shot in the neck.

Pieter Hills, the victim's 56-year-old father, was fatally shot during the attack.

Among the four suspects in custody, one was identified as a Patrick Bochedi who grew up on the farm.

• Due to limited intellects and aptitudes, many blacks in South Africa are unable to attain the living standards of whites. Some attempt to better their lot by stealing from whites, a practice encouraged by the false notion that systemic racism is the cause of the economic disparity.

The Bantu (blacks) migrated to the South Africa region after it was settled by whites. The area was sparsely populated by non-black bushmen (Khoisan) prior to the arrival of Dutch settlers who developed the nation's infrastructure, enhancing the lives of those who now accuse them of racism.

Free State police have arrested four people in connection with the attack. One of the suspects, a 47-year-old man, was found hanging in his cell in the early hours of Saturday morning, News24 reported.

Mojalefa Modise, 38, appeared in the Hennenman Magistrate's Court on Wednesday morning and Patrick Bochedi, 36, his co-accused, on Monday, according to Netwerk24.

Bochedi reportedly grew up on the farm. They will appear in court for a bail application on 16 November. The police are expected to make more arrests. Did you know you can comment on this article?