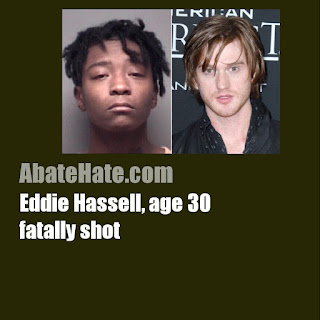 Hassell was an actor, “...best known for roles in NBC’s 'Surface' and 2010’s Oscar-nominated 'The Kids Are All Right.' His most recent appearances were in two 2017 films, 'Oh Lucy!' And 'Bomb City,'” according to nypost.com.

Authorities claim he was “was just a victim of wrong place, wrong time,” according to the report. That place was the parking lot of the apartment complex where he lived.

Excerpted from nypost.com ▼ By Alex Heigl

Texas police have made an arrest in the fatal shooting of actor Eddie Hassell in Dallas last weekend.

Grand Prairie police say they arrested 18-year-old D’jon Antone on a capital murder charge Wednesday in Dallas, according to the Associated Press. He is currently being held on a $500,000 bond at Grand Prairie Detention Center; he does not have an attorney listed for his representation.

Hassell, 30, was shot in a Grand Prairie apartment complex around 2 a.m. Sunday. Officers found him suffering from gunshot wounds and rendered first aid, but he was pronounced dead at an area hospital.

Initially, Hassell’s rep told Variety that the actor was shot in an attempted carjacking. A car was stolen and later recovered, but Hassell was not in it at the time of the shooting; he had been retrieving something from the parking lot, and “was just a victim of wrong place, wrong time,” police spokesman Mark Beseda told the AP.

on November 06, 2020
Email ThisBlogThis!Share to TwitterShare to Facebook
Labels: AbateTheHate