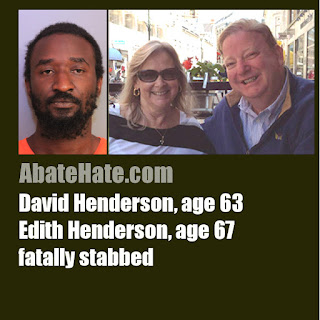 DAILYKENN.com -- David and Edith Henderson were fatally stabbed in Lakeland, Florida. David was 63. His wife, Edith, was 67.

The couple were fatally stabbed during a random attack at their home where they were found deceased in the master bedroom.

Marcelle Waldon, 36, of Lakeland. Police was charged with 10 felony counts, including first-degree murder, according to abcactionnews.com.

Edith Henderson served as a Lakeland City Commissioner from 2006 until 2018.

• What do you think? Why are Americans obsessed with the black-lives-matter movement but show little awareness, let alone interest, in the ongoing black-on-white crime epidemic?

According to Assistant Chief Sam Taylor, David Henderson, 63, and his wife Edith L. Henderson, 67, were found stabbed to death in the master bedroom of their Lake Morton home after police were called for a wellness check around 5:50 p.m. on Tuesday.