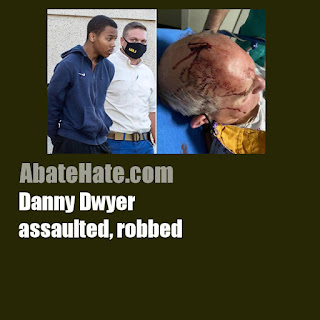 DAILYKENN.com -- Danny Dwyer, a cleaning crew worker, was assaulted and robbed in Tiger Stadium restroom at Louisiana State University. The victim say's he suffered 14 to 15 blows to the head after he was knocked to the floor.

The suspect is identified as 19-year-old Gary Ramses Walker.

Robbery was the apparent motive for the alleged attack. The suspect made off with the victim's wallet containing about $100 in cash along with credit and debit cards. An arrest warrant shows the suspect bragged about the attack, nypost.com reported.

• What do you think? We restrooms in the South once segregated to protect people like Dwyer from black violence? Or were Jim Crow laws expressions of unfounded racial injustice?

A worker hired to clean LSU’s Tiger Stadium has been arrested for brutally beating and robbing a fan inside a bathroom, university police said.

Gary Ramses Walker, 19, of Baton Rouge, was arrested Monday on a charge of second-degree robbery in Saturday’s attack on Daniel Dwyer in a Tiger Stadium restroom...

A manager for the custodial company contracted to clean bathrooms at the stadium said several employees told him Walker had been “bragging” about the robbery after the attack that sent Dwyer to a hospital for cuts to his head, an arrest warrant shows.

He then felt two hard blows to the head as he turned his back to use a urinal, Dwyer told WAFB.

“And as I was on the floor, the person continued to hit me on the back of the head,” Dwyer recalled. “And probably rained down 14, 15 blows.”