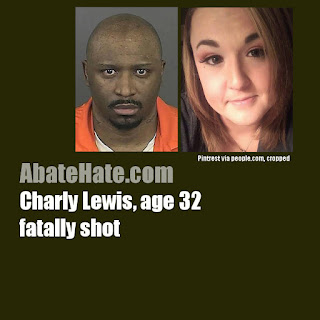 DAILYKENN.com -- Charly Lewis, 32, was fatally shot in Denver, Colorado after reportedly witnessing a murder. Reports say Lewis's body was found in an alley by a bicyclist.

Arrested after the crime is Steven Young, 45, who has been charged with first-degree murder.

The shooting apparently occurred on June 7, 2020. The victim had reportedly witnessed a murder in Aurora on June 1, 2020.

"Aurora Police put out an attempt-to-locate call for Lewis, saying they were concerned for her safety as the only witness to that homicide, according to DPD's arrest warrant," 9news.com reported.

According to the arrest affidavit, surveillance video and HALO footage captured Young and Lewis walking together in the area in the hours before her body was found. DPD looked over "shot spotter" data reports and found that a single gunshot was fired in the area where her body found at 4:23 a.m.  About two minutes later, Young is seen on video leaving the alley without Lewis, the affidavit says.

Detectives learned that Young was a suspect in a homicide that occurred on June 1 in Aurora, according to the affidavit. They were told by an Aurora homicide detective that on that night, Lewis was in a car with Young at one point and witnessed a homicide.

According to earlier information released by APD, dispatch received a report of shots fired around 12:20 p.m. on June 1 in the area of East 16th Avenue and North Akron Street. Responding officers located an adult man, later identified as 41-year-old John Cyprian, suffering from a gunshot wound. Cyprian was taken to the hospital where he later died.

Aurora Police put out an attempt-to-locate call for Lewis, saying they were concerned for her safety as the only witness to that homicide, according to DPD's arrest warrant. Young was arrested in connection with the Aurora homicide on June 8, the day after Lewis was found dead.