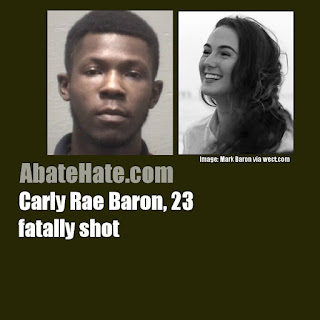 Wect.com reported on November 3, 2020 that the shooting occurred just before midnight on Halloween. Police in the area heard gun fire and rushed to the scene. Officers chased and eventually detained 21-year-old Jaquan Cortez Jackson. The suspect was charged with second-degree murder.

Baron was enrolled at University of North Carolina Wilmington and was a junior pre-Communication Studies major. She was with the Uniquely Creative Model Agency in Wilmington for four years, the report said.

The shooting happened in the 3600 block of Wrightsville Avenue just before midnight. Wilmington police say officers were in the area investigating a noise complaint when they heard gunfire and rushed to the scene.

When police arrived, they saw a vehicle speeding away and performed life-saving measures on the victim, identified as 23-year-old Carly Rae Baron, who later died at the hospital.

Officers chased and eventually detained the suspect, 21-year-old Jaquan Cortez Jackson, who was charged with second-degree murder. He’s being held at the New Hanover County Jail under a $750,000 secured bond.

Police say Jackson was arguing with a group of people after the traffic crash and fired a gun during the dispute.

“At this time, we do not believe the parties knew each other prior to this incident,” a spokeswoman for the Wilmington Police Department said in a statement Monday afternoon.