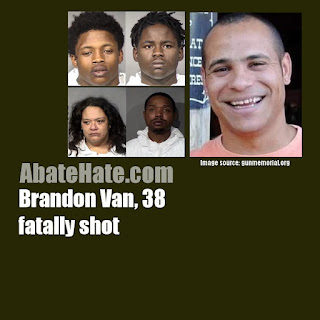 DAILYKENN.com -- Brandon Van, 38, was fatally shot in Mesa, Arizona after he ran for his life. The motive appears to have been robbery.

Reports say the victim was accosted as he walked in a residential area.

The incident was captured by a nearby home security camera.

According to azfamily.com, "Court documents state that the suspects were also involved in a robbery at a convenience store..."

[The suspects] were all driving near University Drive and Dobson Road just before noon when they spotted a man walking in the area. Police say that Culbreath was behind the wheel and he stopped the car near the man, later identified as 38-year-old Brandon Van, and got out to talk to him. Surveillance video in the area showed what appeared to be Culbreath asking Van for directions. The conversation then turned heated and Van walked away from Culbreath.

Documents state that Culbreath then went back to the car, pulled around the corner and approached Van attempting to rob him. The victim ran and Bailey, Mitchell and Culbreath all chased him. Van then hid behind some planters at a home while Mitchell shot at him. Documents state that the home had surveillance cameras and all of this can be seen clearly on video. Van then threw his backpack on the planter to give it to the suspects and stood with his hands up. That's when police say that Mitchell took the backpack and searched Van, then pushed him down and started punching him. Bailey then shot him multiple times. He died at the scene. Bailey, Mitchell and Culbreath all ran back to the car and they drove off.

A viewer shared her surveillance video with Arizona's Family. The footage shows one of the suspects getting out of a white car and approach Van who is walking down the street with a backpack.

"Just a couple minutes later, I heard the gunshots and I witnessed it just over there at the neighbor's house."

The video then shows Van running down the street with three suspects chasing and shooting at him. The group disappears behind some trees before leaving with Van's backpack.

on November 01, 2020
Email ThisBlogThis!Share to TwitterShare to Facebook
Labels: AbateTheHate