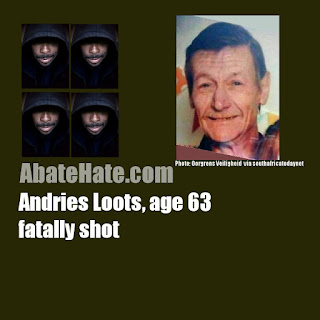 DAILYKENN.com -- Andries Loots, age 63, was fatally shot on a farm in South Africa. Reports say Loots was patrolling the property with a security guard when they were ambushed. The farm had been targeted for thefts in recent days.

Loots was beaten, dragged to a pig pen, then shot multiple times. He was reportedly shot with an AK47.

The shooting victim was apparently employed by the farm as a general laborer.

“First they stole pigs and then they started stealing the pens constructed with corrugated iron sheets.”

Helena says her father who was employed as a general worker and the security guard apparently saw movement at some of the pig pens and while investigating a group of armed men attacked and overpowered them.

The attackers wrestled the security guard to the ground and assaulted Andries.

The security guard heard shots being fired and he was then forced to help load iron sheets and other property onto a LDV.

When the attackers left, the police were called and they discovered Andries Loots’ body.

It is alleged the security guard’s life was spared because he was black.