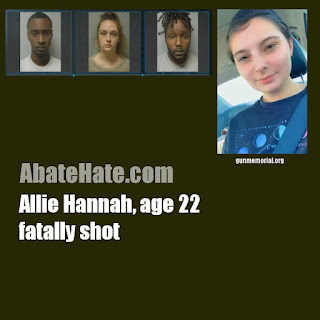 DAILYKENN.com -- Allie Hannah, age 22, was fatally shot in Jonesboro, Arkansas. Three arrests have been made.

Isabelle Hauptman, 19, Jamal Golatt, 21, and Kenney Ivory, 24, are being held in the Craighead County Detention Center in connection with Hannah's death, according to kait8.com.

It appears Hannah was killed because she had witnessed a residential burglary.

According to a probable cause affidavit in the case released Wednesday, Jonesboro police said Hannah had been a witness to a residential burglary that Golatt, Hauptman and Ivory had been involved in and that the trio had picked her up on the night of the murder.

Ivory and Golatt reportedly admitted their roles in the murder, police said, noting a black Glock 40-caliber pistol was thrown from a vehicle as police went to locate both men.

Police later found the pistol and took it into evidence, the affidavit noted.

Officers also found a second firearm, 21 Ecstasy pills, marijuana and a digital scale in the vehicle.