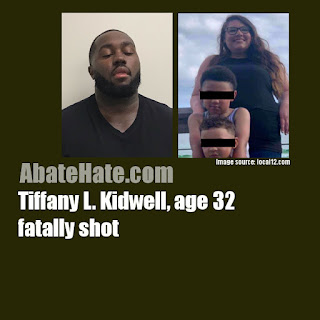 DAILYKENN.com -- Tiffany L. Kidwell, 32, was fatally shot as she sat in her car in Walton, Kentucky. Her 3-year-old son was also shot, but survived.

Tiffany L. Kidwell, 32, of Walton, had pulled into the driveway of her home with her two children in the backseat when, according to investigators, John C. Gentry approached the vehicle.

Gentry, 34, of Crestview Hills, had been in a relationship with Kidwell, according to investigators, but she left him and began staying with family on Winchester Drive. A domestic violence order was in effect against Gentry, the Boone County Sheriff's Office said.

On Friday night, Gentry followed Kidwell home, engaged in a brief verbal exchange, and then shot her multiple times.

Kidwell died at the scene. A 3-year old boy suffered a gunshot wound to the abdomen and was transported to Cincinnati Children's Hospital where he in stable condition. A 6-year old boy was not injured.

After the shooting, Gentry was located by deputies on Grand National Blvd. as he attempted to flee the subdivision. Deputies tried to stop Gentry's vehicle, but the suspect fled on foot.

Soon after, deputies heard gunshots nearby and found another man wounded in the leg near the neighborhood clubhouse. That man and a woman were driving on Grand National Blvd. at Overland Ridge when, deputies said, Gentry pulled his gun and demanded their vehicle.