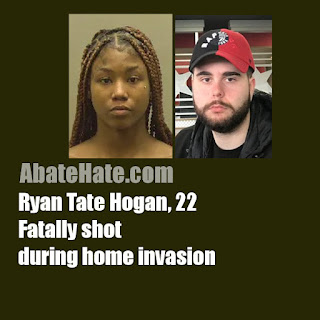 The apparent murder occurred during a home invasion at a mobile home park on September 8, 2020.

Arrested is Dazmin Monique Crisp, 18, of Burlington the report said.

"She's being charged with felony first degree murder and felony breaking and entering. She's being held without bond at the Alamance County Detention Center."

Do Americans have a right to live in safe and secure neighborhoods? Or should we be forced to live with violent and criminal people groups against our will?

Why do you think white leftists prefer to live in white neighborhoods? Are they white supremacists?

on October 02, 2020
Email ThisBlogThis!Share to TwitterShare to Facebook
Labels: AbateTheHate