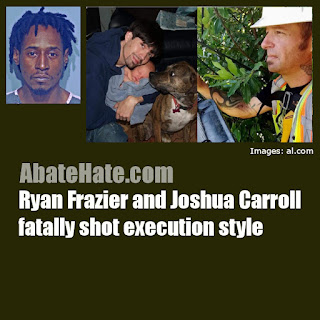 Arrested after their deaths is Antwon Smith, 36, who was charged with capital murder, according to mynbc15.com. Smith has a "criminal history that includes nine prior felony convictions out of Florida. Four of those convictions are drug and weapons related, including a time when he was caught trespassing on FBI property in Mobile," the report said.

"Prosecutors described the double murders in Elberta as 'execution style.' Both victims were shot four times. Autopsy shows victims had gunshot wounds to the back and the to the back of their heads."

Al.com reported the two men began a cross-country trip in August from their home state of Washington traveling to the Gulf of Mexico where they worked as linemen in the wake of Hurricane Laura after it slammed into Louisiana.

According to al.com ▼ By William Thornton

A paper carrier discovered the bodies of Carroll and Frazier in the middle of Baldwin County Road 95 in Elberta about 5 a.m. on Oct. 9. They had been shot to death, four times in the back, including in the back of the head. Both of their dogs stood guard over their bodies. Investigators spent most of the day trying to learn who they were.

The clue was a chip in Buddy, Frazier’s dog, from a previous owner. This led investigators to piece together who the dog belonged to, and pinpoint who the men were. Once they gained that, they realized that Frazier’s vehicle was missing. It was discovered the next day driven in Mobile by Antwon Montrex Smith, authorities say, who shot them and left in Frazier’s automobile.

on October 31, 2020
Email ThisBlogThis!Share to TwitterShare to Facebook
Labels: AbateTheHate