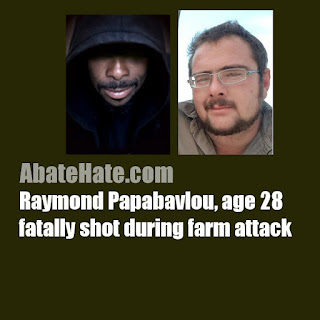 DAILYKENN.com --Raymond Gregory Papabavlou, 28, was fatally shot while sleeping during a farm attack in South Africa.

The crime occurred just prior to midnight on October 4, 2020, reports say.

Raymond was lying in bed while his wife was lying on the couch in front of the television. She fell asleep and woke up to a gunshot. She had a firearm with her and fired warning shots. According to the Groblersdal police spokesperson, adjutant officer Stanley Magaela, the bedroom door was ajar and the woman had fired seven warning shots through the door.

Raymond was pronounced dead at the scene. He was shot five times, once in the head, three times in the side, and once in the back. There were no signs of a fight and it appears that he was killed in his sleep.
...
Adjutant officer Stanley Magaela confirmed that the police are investigating a case of murder. It does not appear that anything was stolen from the house. The only sign that something was missing was a small window in the kitchen that was open.
...
No arrests have been made.