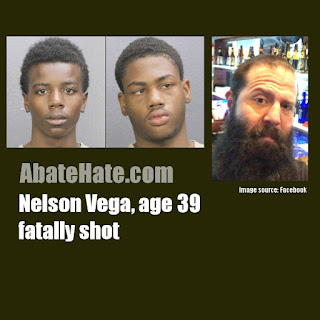 Reports say Vega was returning to his Mercedes after walking his girlfriend to her door when he was encountered by teens Gershon Woods and Nathaniel Williams, both 16 years old.

The teens both fired at Vega, police say.

Nelson Vega, 39, was killed Sept. 13 when he drove his girlfriend home after finishing a shift at J.P. Mulligan's sports bar in Pembroke Pines. Police said Woods and Williams had set out to steal a car to go joyriding.

Vega left his key in his Mercedes with the motor running while he walked his girlfriend to her door, the South Florida SunSentinel reported. As he returned to the car, one teen told police Vega came at them, so they each fired at him.

Police said Vega was shot in the chest and pelvis.

on October 04, 2020
Email ThisBlogThis!Share to TwitterShare to Facebook
Labels: AbateTheHate