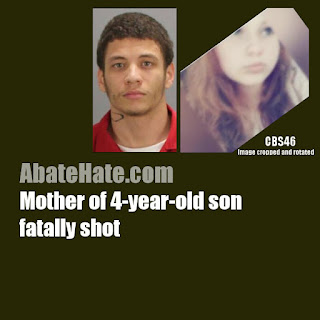 DAILYKENN.com -- The mother of a four-year-old boy was fatally shot in Clayton County, Georgia.

When the four-year-old's grandmother went to check on the "loud noise" inside the house, 26-year-old Karl Anthony Jordan alleged shot both the child and grandmother "from behind." They were hospitalized but survived.

Jordan later carjacked a woman's vehicle at a Waffle House after shooting her in the head. She also survived.

The dead woman was reported in an intimate relationship with the shooter.

The mother of a 4-year-old, who Clayton County police said was the first of four shooting victims at the hands of a gunman on a multi-county crime spree during the Wednesday overnight hours has died. Police released that information during a press conference Thursday afternoon and gave more background into the alleged gunman and his crimes.

Karl Anthony Jordan, 26, was taken into custody on Thursday by the Clayton County Police Department with the help of the U.S. Marshals Regional Fugitive Task Force just hours after attempting to rob a Waffle House in Clayton County. Police said Jordan was wanted in connection to two separate shooting scenes, all within 24 hours.

The first shooting happened at a home along Glynn Court in the Hampton area. Clayton County police said a grandmother was sitting on the front porch and heard a loud noise. When she went to investigate, she found her 4-year-old grandchild standing over her daughter who appeared to have suffered a gunshot wound, police said.

Police said the grandmother quickly picked up the child and tried to go get help but was shot twice from behind. One of those shots also struck the young child, police said.

Police said Jordan had fired those shots and when he was out of ammunition, he quickly fled the scene, allowing the grandmother to get help from neighbors.

Less than 12 hours later, police in Henry County said someone matching Jordan's description walked into the Waffle House located on Highway 155 and East Lake Parkway in McDonough with the intent of robbing the restaurant. Police said officers arrived shortly after 6 a.m. to find a woman who received a gunshot wound to the head. Investigators said the gunman took the woman's car and fled the scene.