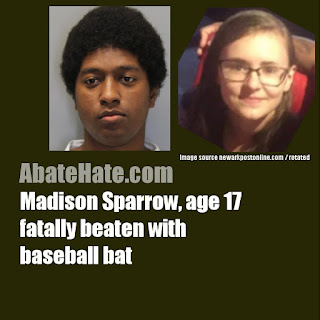 Charged with first-degree murder, possession of a deadly weapon during the commission of a felony and first-degree conspiracy is the victim's ex-boyfriend, Noah M. Sharp, 19.

Sparrow, a junior at Newark Charter School, told her family she was going out with a female friend to get ice cream and buy a birthday present for her sister Friday afternoon. The family reported her missing Friday evening.

An interview with one of Sparrow’s friends led police to develop Sharp as a suspect.

Court documents allege Sharp used an aluminum baseball bat to fatally strike Sparrow in the head in a wooded area behind Maclary Elementary School on Friday afternoon or evening. Detectives searched the woods and found the bat, blood droplets and Sparrow’s clothing.

In an interview with police, Sharp confessed to the killing and directed detectives to a wooded area near Interstate 95 and Del. 896, where they found Sparrow’s body, according to court documents. An autopsy ruled her death homicide by blunt-force trauma.