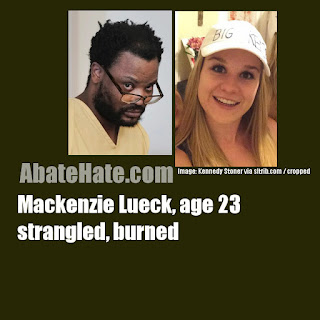 DAILYKENN.com --Mackenzie Lueck, 23, was strangled to death in 2019. Her charred body was later found in a shallow grave in a Utah canyon.

"Ayoola Adisa Ajayi pleaded guilty Wednesday [October 7, 2020] to aggravated murder, a first-degree felony, in her death. In exchange for his plea, prosecutors agreed not to seek the death penalty," according to slttrib.com.

The suspect is reportedly from Nigeria.

Ajayi, a 32-year-old tech support worker, admitted that he strangled Lueck at his Salt Lake home in the Fairpark neighborhood, burning her body and and burying her in his yard. After detectives investigating Lueck’s disappearance knocked on his door, he took her remains to the northern Utah canyon and buried her again, his attorney said Wednesday.

He and Lueck had met in 2018 on the website Seeking Arrangements, which bills itself as a platform for so-called sugar daddies to meet sugar babies. They ultimately agreed to meet up once Lueck returned to Utah.

Police said her Lyft driver dropped her off at North Salt Lake’s Hatch Park about 3 a.m. on June 17.

Before leaving his home to meet Lueck and to prevent documentation of her presence, Ajayi turned off his security video cameras, Hamilton said. Once he and Lueck arrived at his home after first meeting at the park, he tied her hands behind her back and began choking her.

Instead, Ajayi moved Lueck onto her stomach and used a belt to choke her until she stopped moving, he said.