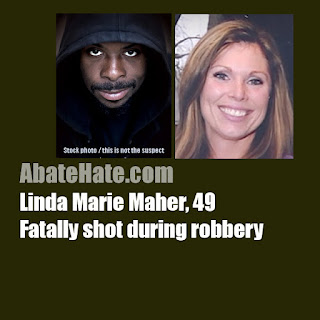 Maher was working as a clerk at the time of the shooting.

Maher was a mother of four who was married to her high school sweetheart, according to nbcwashington.com.

Police responded to the call on October 1 at 12:50 a.m. according to thebaynet.com.

The suspect is described as a Black male, 5’7” – 5’10” with a slender build. He was wearing a white facemask, a dark, hooded sweatshirt, jeans and dark tennis shoes.

The clerk, identified as 49-year-old Linda Marie Maher of White Plains, appeared to be complying with the demands and handed over money to the gunman when he shot her, Richardson said.

Maher died at the scene. Richardson said there were customers in the store at the time of the shooting and that authorities are reviewing security cam footage at this time.