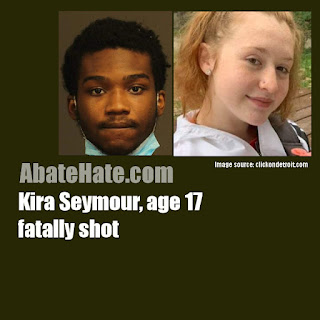 Reports say Seymour was visiting her boyfriend when he allegedly shot her in the chest. The victim's 6-week-old daughter was nearby.

Rayquan Taylor "was charged with manslaughter, two counts of felony firearm and death by weapon aimed with intent but without malice," according to clickondetroit.com.

A Roseville High School senior was shot and killed Wednesday with her 6-week-old daughter nearby.

According to authorities, 17-year-old Kira Seymour was visiting her boyfriend in Eastpointe when she was shot in the chest.

Her boyfriend has been taken into police custody.

Neighbors said the family largely kept to itself. Young children would occasionally come out and play basketball, but wouldn’t talk to anyone. Neighbors said they didn’t even know their names.

Seymour knew the family well. It was where her young baby’s father lives. Wednesday, Seymour came to visit her boyfriend with their daughter. Police said other family members were home at the time. Just before 4 p.m., she was shot and killed.

Eastpointe police responded immediately, found her dead from a gunshot wound to the chest and took the boyfriend into custody.

Investigators are trying to figure out if the shooting was accidental or deliberate.