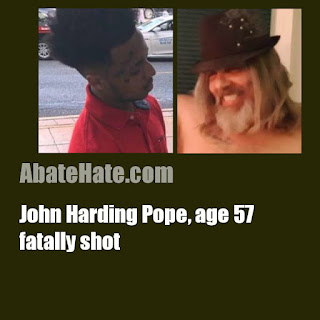 DAILYKENN.com --John Harding Pope, 57, was fatally shot in his apartment in Alexandria, Virginia.

Arrested is Tavon Marquis Lanier, 19, who was charged with second degree murder and use of a firearm in commission of a felony.

Reports tell a backstory of a community that progressively became infested with criminal activity prompting law-abiding residents to flee to safer neighborhoods. Those who could not relocate remained hostage to a hostile environment as savage youths terrorized their neighbors.

Break-ins, robberies, and burglaries became more common as the neighborhood was colonized by criminals. Fair housing laws made resistance a crime. Therein lies the irony: To resist the criminalization of your neighborhood is to become a criminal.

What do you think? What can you do to keep your neighborhood from being colonized by criminals?

Neighbors Devonte Burgess and his girlfriend Kayla Barb live on the floor above Pope, who lived with his 77-year-old mother.

“They’re trying to break into people’s apartments and rob them,” Barb said. “They were trying to kick our door in.”

Neighbors Walter and Tammy Washington don’t feel safe. They say that the building next door to them where Pope lived has become dangerous in recent months, with young people hanging out on the front steps, smoking marijuana, arguing and fighting at all hours of the day.

“Cursing, yelling, running up and down the stairs, slamming doors,” Walter Washington said, adding that Pope has been a constant presence. “(Pope’s) kind of like the house mom, so to speak, for the building.”

Pope, 57, was shot at his home in the 5900 block of Quantrell Avenue in the Mayflower Square apartment complex. He later died at the hospital.

Neighbors reported to ALXnow that one of the suspects was light-skinned and had tattoos on the right side of his face.

on October 04, 2020
Email ThisBlogThis!Share to TwitterShare to Facebook
Labels: AbateTheHate