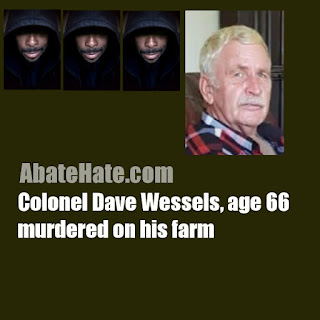 Reports say the victim's body was found under a duvet on Sunday morning, October 25, 2020. Wessels was found bound with an electrical cord and stab wounds in his head.

He was found by a concerned neighbor who saw blood on the walls in Wessels's home through a window. Police were summoned and found the victim's remains.

Reports say the suspects made off in Wessels's bakkie, a small truck common in South Africa. Wessels sold cattle as a profession and kept cash in his house, reports say.

Colonel Dave Wessels served in the Border War and completed several operations, even after losing his leg in 1975 in a battle at Novo Redondo.

He received the Honoris Crux medal of honor for bravery saving a wounded black soldier under fire.

Mr Wessels’s body was found under a duvet on his Avondster smallholding in Fortuna street, Viljoenskroon, Free State on Sunday morning.

There was blood everywhere in the house. Mr Wessels was found tied up with electrical wire and he had several stab wounds to his head.

His body was discovered when a neighbour did not see Mr Wessels around and went looking for him. The neighbour looked through a window and saw blood on the walls. He then called the Police who discovered the body of Mr Wessels.

Mr Wessels’s white Toyota bakkie was missing from the house.

Mr Wessels stayed alone and was divorced. He made a living by selling cattle. It is reported that Mr Wessels ran a cash business and kept money in the house.