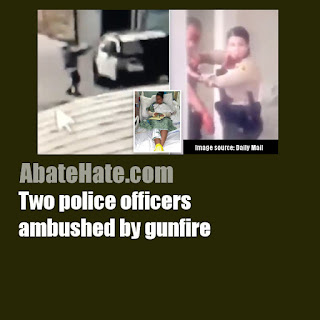 The attack occurred on September 12, 2020 and was captured on video.

• Video of two innocent officers being shot without provocation helped reverse the guided-image effect of the George Floyd incident. The image of career criminal Floyd being restrained by police in Minneapolis was exploited by the far-left mainstream media to stoke hatred for whites and police officers. That hatred likely contributed to the ambush in Compton. The phenomenon is sometimes called 'stochastic violence.'

• What do you think? Should the far-left mainstream media be held complicit in the ambush?

Excerpted from foxla.com ▼ By Mary Stringini

He had already been charged Sept. 17 with one felony count each of carjacking, second-degree robbery and assault with a semi-automatic firearm -- along with gang and gun allegations -- involving a Sept. 1 carjacking in Compton, in which he allegedly shot a man in the leg with a high-powered rifle and stole his black Mercedes-Benz. He pleaded not guilty to those charges and has remained behind bars since his Sept. 15 arrest.

District Attorney Jackie Lacey expressed her best wishes to the injured deputies and said, "They became victims of a violent crime for one reason: They were doing their job and they were wearing a badge."