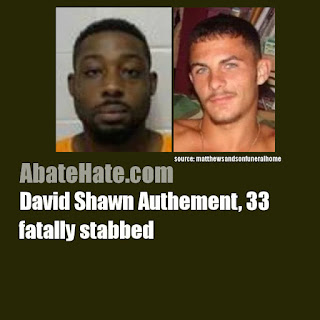 DAILYKENN.com -- David Shawn Authement, 33, was one of two fatally stabbed at a Jenning, Louisiana. home.

Reports say Authement was found with stab wounds inside the home. Another victim, Kristan Nicole Thibodeaux, 24, was found in the driveway.

Arrested is Kendrick Nixon, 35. He was charged with "one count of home invasion and two counts of first-degree murder in connection with the stabbing deaths of Kristin Thibodeaux, 24, and David Authement, 33..." reports say.

Two people were stabbed to death at a residence on the corner of W. Division and Down streets in Jennings early Wednesday morning, authorities say.

The stabbing was reported to 911 around 2:15 a.m. Wednesday, Jennings Police Chief Danny Semmes said. It is believed that an argument over money led to the incident.

Arriving officers found Kristin Thibodeaux, 24, in the driveway with a stab wound to the side of her body, Semmes said. She was unresponsive and officers began giving her CPR.

As more officers arrived, they saw numerous people going in and out of the house, Semmes said. Officers cleared the house and found 33-year-old David Authement stabbed once in the chest in a back bedroom.

Officers also performed CPR on Authement, but he was pronounced dead at the scene, Semmes said. Thibodeaux died at a local hospital.

The suspect, Kendrick Nixon, 35, of Jennings, was arrested without incident around 8 a.m., approximately 10 blocks from the crime scene, Semmes said. District Judge Steven Gunnell signed a warrant for one count of home invasion and two counts of first-degree murder.

on October 05, 2020
Email ThisBlogThis!Share to TwitterShare to Facebook
Labels: AbateTheHate