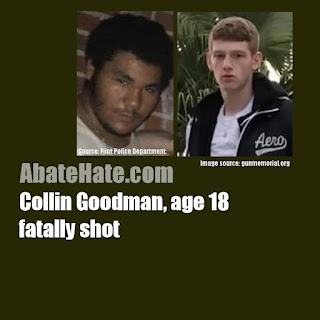 "A female victim who’d also been shot was transported to a local hospital with critical injuries, but she is expected to be OK, police said," according to mlive.com.

One of two suspects is in custody. Charges are pending review, reports say.

"Charges for the second suspect, James Malachi Lara, 16, have been issued for: murder, assault with intent to murder, 2 counts of felony firearm, and carrying a concealed weapon," according to wnem.com.

A suspect who was considered armed and dangerous has turned himself after police were searching for him.

When on the scene, officers found Collin Goodman, 18, had been fatally shot. A female victim, who was also shot, was taken to the hospital and is expected to recover.

Police said the investigation led to two suspects in the case. One of those suspects is in custody and charges are pending review.

Charges for the second suspect, James Malachi Lara, 16, have been issued for: murder, assault with intent to murder, 2 counts of felony firearm, and carrying a concealed weapon.

He is being charged as an adult.

on October 02, 2020
Email ThisBlogThis!Share to TwitterShare to Facebook
Labels: AbateTheHate